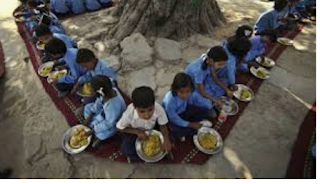 Hunger and Poverty are Related Issues

A common, often altruistic, theme amongst many is to be able to solve world hunger via some method that may produce more food. However, often missed is the relationship between poverty and hunger. Hunger is an effect of poverty and poverty is largely a political issue. (While manifesting itself as an economic issue, conditions causing poverty are political and end up being economic.) People are hungry not due to lack of availability of food, but because people do not have the ability to purchase food and because distribution of food is not equitable. In addition, there is also a lot of politics influencing how food is produced, who it is produced by (and who benefits), and for what purposes the food is produced (such as exporting rather than for the hungry, feedstuff, etc.
Food as a Human Right
Reporting from the World Food Summit 2002, and highlighting some shocking obstacles to getting a declaration on tackling these issues, Peter Rosset reported on day one:
Solving Hunger Effectively Requires Addressing Causes of Poverty
While providing solutions to hunger via more efficient food production seems to be a noble endeavor, problems lie in distribution, land ownership, inefficient use of land, politics and powerplay. Currently, food production rates are higher than population growth (although that is no reason to be complacent). Tackling hunger directly by providing more charitable contributions of food, or even finding ways to increase production, is attacking the symptoms of poverty only, not root causes.
That is not to say that research to increasing food production should not be done, just that it should be recognized that the deeper problem of fighting the roots of poverty that causes hunger would allow better use of resources in the long term. Not fighting root causes of poverty and only fighting hunger will be costly in the long run as people will continue to be hungry and resources will be continually diverted to remedy hunger in a superficial manner without addressing its cause.
Solving world hunger by only increasing food production and not addressing root causes of hunger (i.e. poverty), would not alleviate the conditions that create poverty in the first place. If the poorer nations aren’t given the sufficient policy space and means to produce their own food, if they are not allowed to produce and create industry for themselves, then poverty and dependency will continue.
To address the causes of poverty then, is where more effort needs to be. However, that is no easy task.
Food subsidies have often been used by governments to help the poor, though many nations have either voluntarily, or under pressure from aid donating countries actually removed these subsidies.
Muh Plavious
NAYD CAMEROON