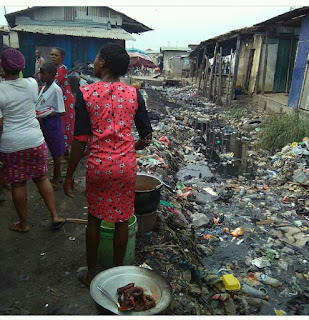 This is Douala, the economic capital of Cameroon. The people here are tolerance. They live together with both harmful and helpfulet agent. They have no problem living and eating in the dustbin and even toilet. Some toilets are emptied into running water when it rains and most industrial waste are emptied into streams untreated. The ministry of environment and forestry have no problem with this habits.

In Douala, 80% of household waste is collected while just 40% of industrial waste is treated.
The collection and treatment of household and industrial wastes is still a great problem in the economic capital, Douala. The improper collection and inadequate disposal of the waste is a threat not only to the environment but to man, animals and even birds. During a meeting last Tuesday to discuss the way forward of proper disposal, collection and treatment of waste in Douala, Herman Tchackejong Adjota, who represented the Governor in the event made known that the risk generated is enormous, thus there is need for lasting solutions on the disposal, collection and treatment. During the meeting that lasted for over three hours, the Regional Agency Director of Hysacam, Ymele Jean Pierre evaluated household waste production at 4,000 tonnes daily nationwide with 1,500 tonnes produced in Douala alone. He disclosed that with the over 100 waste collection trucks, they carry just 80 per cent of the waste while households disposed 20 per cent of waste in drainages and gutters which most often cause floods and epidemic in some areas. He called on the population to dispose of their waste properly by carrying out pre selection that includes the separation of plastics from solid waste and the separation of liquid waste amongst others. In the same light, of some 15,000 tonnes of industrial waste produced in Cameroon, 9,000 is produced in Douala given that over 60 per cent of companies are located in Douala. According to officials in the Delegation of Mines, just 40 per cent of the 9,000 tonnes of industrial waste is treated while 60 per cent is disposed of in the environment which is dangerous to health and environment. To ensure proper treatment of the waste, the delegation of Mines proposed the creation of waste management centres and the sensitisation of companies on the dangers of haphazard waste disposal.
MUH PLAVIOUS KIENYUI
NAYD CAMEROON