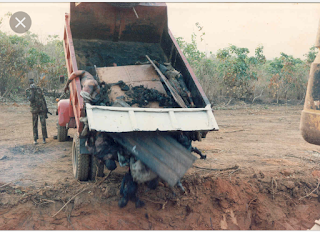 A cleric has reported the killing of 120 people who were returning from a funeral service.


The police confirmed the attack but said only 11 persons died.

Pam Chollom stated this in an interview with PREMIUM TIMES on Sunday. He said the attack on Saturday lasted for several hours.

“Fulani people attacked our members who attended the burial of the father to one of our clergy Baba Jakawa, at Gidin Akwati, Gashis district. Late Jakawa was aged over 80 years, a committed member of COCIN, so his burial attracted many sympathisers.”


“The armed Fulanis ambushed the sympathisers on their way back from the burial, attacked and killed 34 persons from Nekan village, 39 others from Kufang, and 47 people from Ruku village.

“As we speak with you, many others are still missing in the bushes,” he said.

The cleric added that “the sad incident started at about 1:00 p.m. in the afternoon, and lasted still about 8:00 p.m. yesterday (Saturday).


The spokesman of the STF, also known as “Operation Safe Heaven,” Umar Adams, confirmed the attack in an interview with PREMIUM TIMES on Sunday.

He, however, could not ascertain the casualty.

“I’m speaking with you from one the scenes of the incident. Our men were able to repel the attackers, made some arrest, though lives were lost. But at the moment, I cannot tell you exact number of the deaths.”

“Our men in Barkin Ladi responded promptly to the incident, because they heard sounds of the gun shots, and moved to the direction.


“On reaching there, there was another similar incident in another village, some of them were redeployed to the affected area. We have been able to arrest the situation, it is now calm.”

On its part, the Nigeria Police Force, through its spokesperson in Plateau, Terna Tyopev, told journalists in Jos that 11 people died from the attack.

Mr. Tyopev said the bodies of the deceased persons have been deposited at the Barkin Ladi general hospital. He also said armed personnel have been redeployed to the trouble areas.

Meanwhile, Plateau State Government has confirmed the attacks and commiserated with victims of the attacks.


A statement by the Commissioner for Information and Communication Yakubu Dati, said the government regrets the incident.

“Government is deeply pained that despite concerted efforts which had led to the restoration of relative peace across the state, some unpatriotic elements are bent on disrupting the gains so far made.

“We, however, appeal to citizens not to take laws into their hands and cooperate with security agencies to prevent further break down of law and order as they track perpetrators of the evil act.”


The cleric, Pam Chollom, also told PREMIUM TIMES that over 30 houses were completely burnt by the attackers

Plateau is one of the states most affected by clashes between farmers and migrant herders.

Hundreds of people have been killed in attacks linked to herdsmen in Plateau and neighbouring states like Benue since January.