A good meal ought to start with hunger 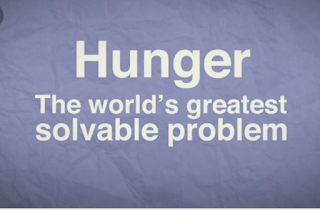 In a world of abundant wealth and resources, where enough food is produced to feed everyone on the planet, it is unacceptable that hundreds of millions of people suffer from hunger. Right now, poverty, conflict, and climate change are contributing to hunger and suffering around the world. And in four countries – South Sudan, Somalia, Yemen, and northeastern Nigeria – 20 million people are facing severe food insecurity and looming famine.
The United Nations and its agencies including the World Food Programme (WFP), the Food and Agriculture Organization (FAO), and the International Fund for Agriculture Development (IFAD) are working to reduce hunger by getting emergency food supplies to families in crisis, improving agricultural and food production, building resilience in communities, and other steps vital to eliminating hunger and malnutrition.
The good news is that the UN, along with the work of governments, businesses, civil society, and other partners, has made gains in the fight against hunger in recent decades. We have the ability to end hunger; now we need to mobilize the collective will.
Here are five reasons to care about stopping hunger worldwide:
What you can do to help fight hunger?
First, stay informed. An informed public is the first step to any meaningful action. Learn more about the global goal to eradicate global hunger by 2030, and about the other Sustainable Development Goals.
Second, donate. UN agencies and other humanitarian partners urgently need funding to combat famine and hunger worldwide. Donate here to WFP, the largest humanitarian agency fighting hunger worldwide.
Third, use your voice. Let your leaders, friends, families, and social networks know that you care about ending hunger, you support the UN’s work, and you believe we need to provide funding and other resources to the UN and partners working to reach the goal of zero hunger
MUH PLAVIOUS KIENYUI
NAYD CAMEROON