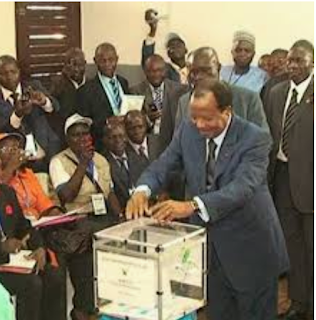 Cameroon’s economic capital Douala has been highly militarised to contain a planned protest march organised by political actors against what they describe as massive fraud during the October 7 Presidential election.
Though banned by local authorities, organisers have vowed the protest will take place, prompting security officials to take measures to counter any move.
Thus the city woke up to a heavy deployment of troops and anti riot vans at strategic areas of the town with security checks carried out.
Reports say at least four persons have been arrested by security forces around the Rond Dakar neighbourhood in the Douala III sub division where the protest was supposed to take place.
The residences of the main organisers Jean Michel Nintcheu as well as that of activist Edith Kah Walla were heavily militarised with reports pointing to a possible house arrest.
A video that was later released showed Kah Walla, urging the security men to leave her residence saying she is not part of any protest.
On his part Jean Michel Nintcheu, regional chair of the Social Democratic Front and main organiser of the protest has not been seen.
Local SDF officials in the Littoral region had distanced themselves from the protests during the week prompting speculations of an internal crisis within the party.
The tensions in Douala come on the eve of the proclamation of the results of the Presidential election by Cameroon’s Constitutional Council that rejectted petitions from the opposition to cancel the polls on grouns of massive fraud.
Paul Biya, 85, is widely expected to be declared winner of the October 7 polls handing him another seven-year mandate to exktend his 36-year rule.
MUH PLAVIOUS
NAYD, CAMEROON