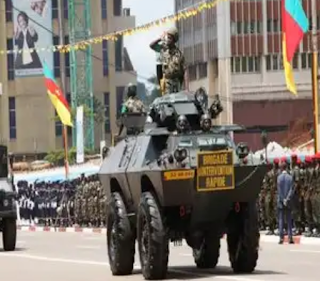 Yaoundé inhabitants are in great fear as election day approaches. Since yesterday Friday 5th october 2018, yaounde is littered with military and armor Car moving from one part of the town to another. For fear of the unknown, denizens of Yaounde have stock their home with as much food that they can buy should in case the worse should happen.  On the eve of the election, today Saturday 6th October 2018, there is shortage of bread and other foodstuff around the city. People seems to the anticipation civil unrest and to be on the safe side are gather enough to feed their families.

Last month salaries have not also been paid by many actor in the private sector. They are holding their workings salaries till after election.  Many say they have had a consultation meetings and withheld salaries as could be used to sponsor war.

Internet services have not also been the best. Since the 5th, customers are receiving messages of incident on optical fibers and many say the government intended to suspend Internet services on election day as they plan to crush any suspected fly within the national territory.

Houseflies and mosquitos seems to be aware of the situation and a finding their way out of Yaoundé. If you are in Yaounde,  no need to buy insecticides as they are on the run.