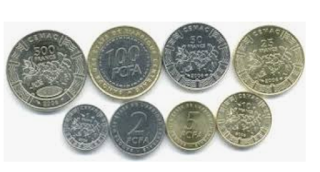 Astonishing discovery at the Ndogbong district, Douala III district. On November 1, 2018, more than 2 000 000 FCfa coins of 50 and 100 F, contained in 43 bags were seized in a private home. Suspected of being at the head of a trafficking organization of silver coins from Cameroon to Asia, two individuals were arrested. He is a Cameroonian and a Chinese, all 37 years old. This operation owes its success thanks to the denunciation of the neighborhood which had noticed strange behaviors at the home of the suspects.
During this trick carried out by the elements of the Territorial Gendarmerie Group of Douala, about twenty slot machines, rare wood species (Bubinga, ebony) but also ammunition were also seized, reports Cameroon-forum. This organized circulation of coins is undoubtedly one of the causes of their scarcity in Cameroonian trade in recent times.
MUH PLAVIOUS KIENYUI
NAYD CAMEROON